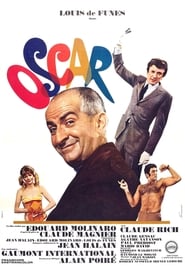 This film originated as a play in Paris. The story focuses on the one-day adventures of Bertrand Barnier played with a genius of French cinema, Louis de Funes. In the same morning he learns that his daughter is pregnant, an employee stole a large amount of money from his company, his maid is about to resign in order to marry a wealthy neighbor and his body builder is interested in marrying his daughter. The seemingly complicated story-line is full of comedy or errors and some of the most hilarious mime scenes of the French cinema.