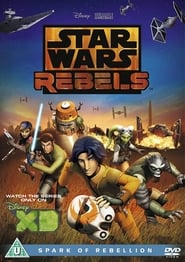 A Long Time Ago In A Galaxy Far, Far Away… Against the might of the Galactic Empire, an unlikely band of heroes emerges to renew the fight for freedom. Five years before the events of Star Wars Episode IV: A New Hope, the reigning evil Empire continues to tighten its grip of power and fear throughout the cosmos. But even amidst the tyranny and oppression of these dark days, a glimmer of light emerges. Meet the ragtag crew of the starship Ghost: Twi’lek pilot Hera, street-smart pickpocket Ezra, team leader Kanan, alien enforcer Zeb, explosives expert Sabine, and Chopper, the cantankerous Droid. Together, they embark on action-packed adventures, battle ruthless villains, and ignite the very first Spark Of Rebellion against a surging tide of Stormtroopers, TIE fighters and the mysterious Inquisitor.